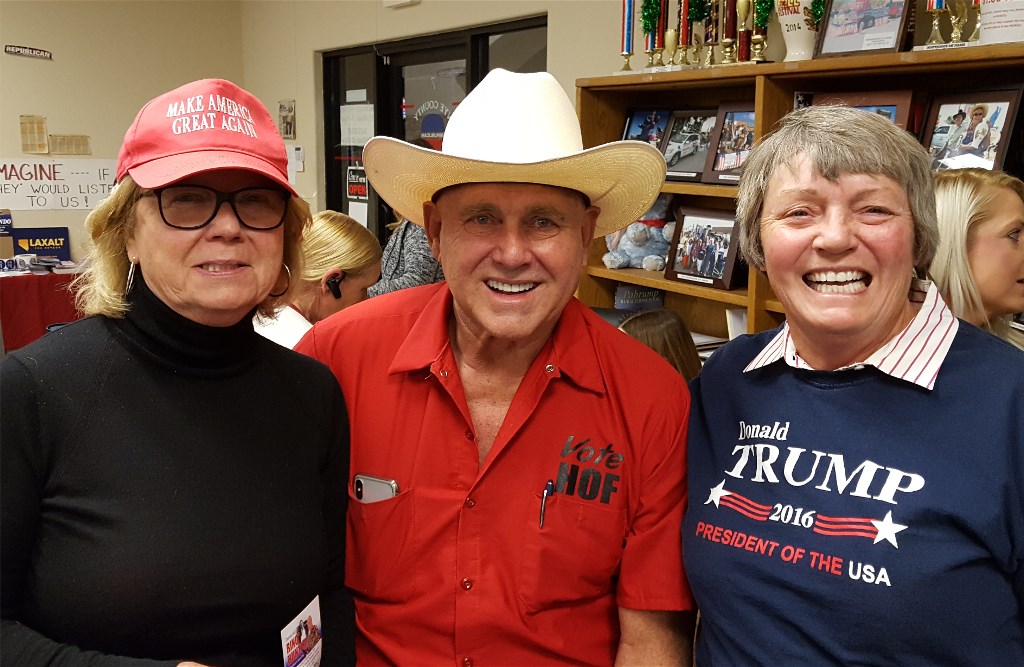 Over a plate of ribs and chicken fingers at Living the Good Life, a diner and lounge in Carson City, Hof complains about state tax hikes, local efforts to outlaw prostitution and government grabs for landowners’ water and more.

Hof, the 71-year-old star of HBO’s “Cathouse” series and Republican nominee for Nevada’s 36th District in the State Assembly, is fashioning himself as the “Trump from Pahrump.” He’s a brash candidate who courts the kind of controversy and attention other politicians seek to avoid. And he says his career in politics is all possible because of Donald Trump.

“This is the new breed of politicians because of what Donald Trump has done. He’s opened that door. Before this, who would have ever elected somebody who said, on tape, ‘Grab ’em by the pussy’? Nobody ever would do that,” Hof says.

Now, he says, voters seem to have decided, “I’d rather have that than the guy that’s going to lie to me and raise my taxes and sell me out to the special interests.”

Just like Trump in 2016, Hof’s candidacy is forcing Republicans to grapple with uncomfortable realities about their party’s restive base in Nevada, which is a swing state in presidential years and one of the nation’s most important in 2018’s midterm elections. The governor’s office, a key Senate seat and two competitive House seats are on the ballot.

The day after the primary, Adam Laxalt, the GOP nominee for governor, said in a radio interview he wouldn’t support Hof. Sen. Dean Heller, who is up for re-election this year, will also not back Hof, according to local reports.

Hof says he believes Republicans who don’t back him could face backlash from rural, white voters in areas like Nye County, where several of his brothels are located. Huge margins of victory in those counties are crucial for Republicans in statewide elections, when the party’s candidates need those votes to make up for losses in the Democratic stronghold of Clark County, the home of Las Vegas. And Hof has the support of some Nevada evangelical leaders, who are important drivers of Republican turnout.

Hof says he was inspired to run for office by Trump’s candidacy.

Both had reality television shows and books. Hof admits to cribbing his title, “The Art of the Pimp,” from Trump.

What the two have in common, Hof says, is a “can’t buy him, can’t break him” approach to politics. Both entered the arena late in life, already wealthy and with no real ties to corporate donors or lobbyists outside their own business interests.

But the similarities go farther.

Trump starts his mornings by turning on “Fox and Friends” and taking to Twitter. Hof spends his evenings watching the Fox News shows of Tucker Carlson — who he says he’s known for 15 years and texts most days after Carlson’s show — and Sean Hannity.

Hof calls Roger Stone, the flamboyant Richard Nixon veteran who has at times been close with Trump, the head of his campaign. He says Stone has urged him to use the legislature to “get your feet wet” ahead of a future run for governor, and wonders whether Trump — or, in Hof’s words, “The Man” — has blessed the idea.

And Hof calls himself a “flamboyant, loud-mouth guy.”

Hof, like Trump, faced accusations of sexual assault during his campaign. Two former prostitutes alleged he sexually assaulted them several years ago. Hof has denied those allegations and says they are part of a smear campaign against him, and prosecutors did not pursue charges, citing the statute of limitations.

Much like Trump, who was known to tip off the New York tabloids, Hof’s penchant for controversy is a marketing strategy. Nevada law severely restricts advertising for brothels, so Hof relies heavily on press coverage.

Much of it, Hof admits, is a “PT Barnum” act — such as in 2012, when he launched a “Pimpin’ for Paul” campaign to have visitors at his Moonlite BunnyRanch brothel donate to Ron Paul’s presidential campaign.

It was a “gigantic media score,” he says.

Hof says he decided to try to take down three-term Oscarson after Oscarson in 2015 backed Gov. Brian Sandoval’s package of tax hikes, including a new “commerce tax” on businesses that make more than $4 million per year.

“It just pissed me off,” Hof says.

First, he tried as a Libertarian — taking 39% of the vote against Oscarson in the 2016 general election. In 2018, he ran again, this time as a Republican running with Grover Norquist’s support, and took 43% of the primary vote to Oscarson’s 36%.

It’s a deep red district, and though Democrats are fielding a candidate in school principal Lesia Romanov, Hof is heavily favored to win.

Hof acknowledges Trump’s agenda has hit roadblocks on Capitol Hill, and that the transition from brawling businessman to member of a legislative body wouldn’t be easy.

Hof says he’s now working on selling a documentary series on his campaign. The working title: “The Art of the Pimp: From Prostitutes to Politics, Where the Real Whores Are.”

He also says he wishes he could out “these dirty SOBs” in the legislature who are customers at his brothels.

And Hof says — for irony’s sake — he wants to buy an aging hotel across from the state capitol and turn it into a brothel.