State lawmakers should not shun brothel boss Hof; some have ‘partied’ with his prostitutes, LV Councilwoman Fiore says 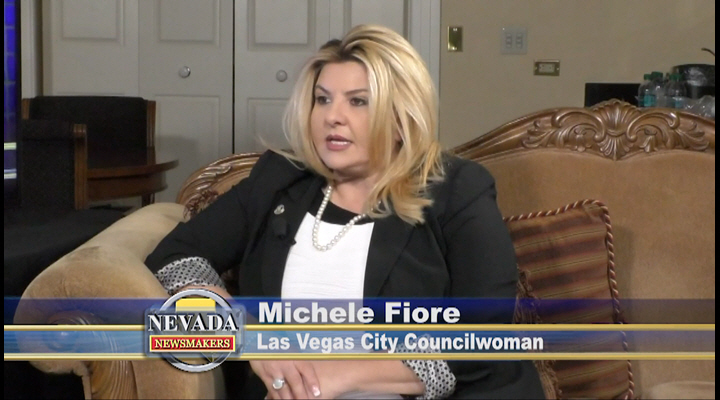 (Ray Hagar | Nevada Newsmakers) – Las Vegas City Councilwoman Michele Fiore said on Nevada Newsmakers the Nevada Assembly Republican caucus of the Legislature is making a mistake by shunning brothel owner Dennis Hof, a Republican who looks like a shoo-in to win the District 36 seat in November.

Fiore declined to name names, saying, “I would never rat a peer out.”

Before running for office, Hof had good relationships with state lawmakers, said Fiore.

Yet now that he is close to becoming a GOP assemblyman from Pahrump, the Assembly GOP caucus has said it will not endorse any candidate in Hof’s race.

Hof defeated incumbent Assemblyman James Oscarson in the GOP primary and is considered a solid bet to win the general election because District 36 has a heavy Republican majority.

If Hof wins, he will do it without the blessing of many of Nevada’s top Republicans. Gov. Brian Sandoval and U.S. Sen. Dean Heller have indicated they will not support Hof.

Assemblywoman Jill Tolles, R-Reno, has said she will not caucus with Hof if he is seated at the Legislature.

“Before (Hof’s) getting into the political game, most legislators had visited his brothels, partied with his girls and had taken checks from him,” Fiore said.

During brothel tours, some lawmakers would “disappear,” Fiore said.

“When you have a legislator who is on the tour with you disappear for a little while and then come back, I don’t know, where was he at?” Fiore said. “Maybe he had an upset stomach and has been in the bathroom for awhile.

“But I’m just going to say, folks who don’t want to see Dennis Hof (in the Legislature), those people in glass houses should not throw stones. And I think if they really pushed that agenda (of shunning Hof), they might be quite surprised on other folks’ understanding, like how much time they spent in these brothels.”

The Assembly GOP caucus should embrace Hof if he wins in November because voters in District 36 will have picked him to be their representative, Fiore said.

“The legislators who say they don’t want to caucus with Dennis Hof need to put their big girl or big boy panties on and figure it out,” Fiore said. “The bottom line is he was elected by his constituents and if he makes it through the general, he will be the assemblyman. And I think they (Assembly GOP caucus) will do themselves a great disservice if they don’t support the person that his constituents support.”

Earlier this week, Hof lost his license to operate his Love Ranch in Nye County after he failed to apply for renewal and pay fees on time, according to the Las Vegas Review-Journal.

Hof could also lose his four brothels in Lyon County — including his flagship BunnyRanch — if county voters approve a ballot measure to ban legal prostitution. A similar petition in Nye County did not qualify for the ballot.

Fiore said part of Hof’s problem is his celebrity status. His BunnyRanch was featured in the HBO series, “Cathouse” and Hof is a go-to source on prostitution for various print and electronic media outlets.

Hof also spoke about legal prostitution as an invited guest in 2012 at the prestigious Oxford University in England.

“Dennis is a celebrity in his own right,” Fiore said. “He’s had an HBO special. A lot of folks don’t want to talk about Dennis Hof the business man, before the brothels. He’s owned many companies, gas stations and other things. Now that he’s a brothel owner, its a problem, because he is getting into the political game.”