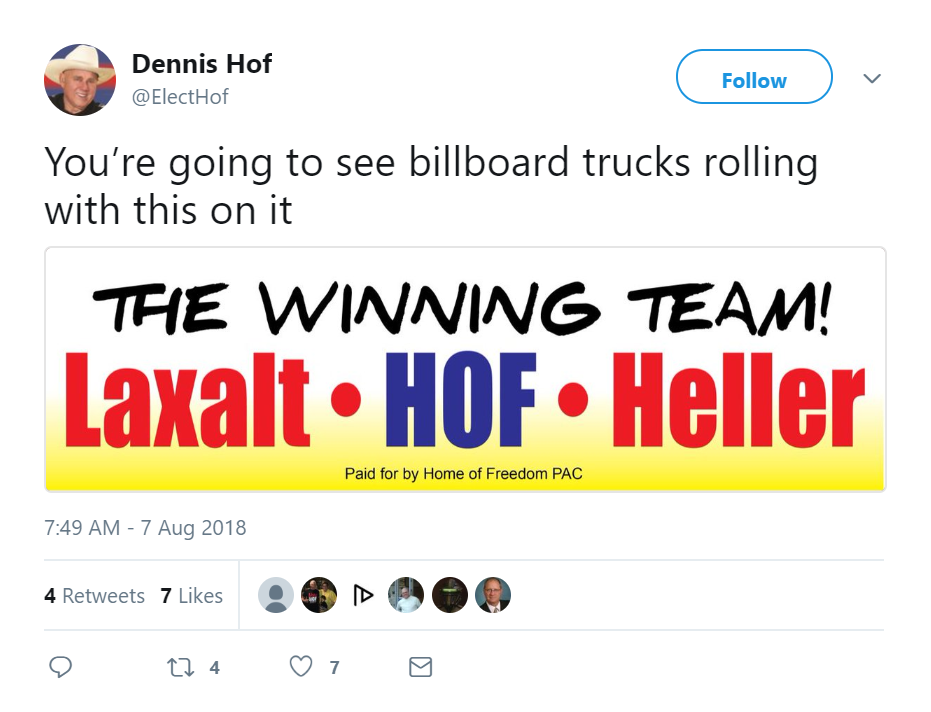 The GOP governor hopeful became the first of several high-profile Republican candidates to distance himself from Hof after June’s primary election, though he said Monday he wasn’t concerned about plans for a billboard campaign that describes himself, U.S. Sen. Dean Heller and Hof as part of a “winning team” in November.

‘We’re not concerned about it’

Hof announced the billboard buying spree on Twitter last week, explaining the move was meant to show he had no hard feelings toward Laxalt, Heller and a host of other Republicans who disavowed him in the wake of several well-publicized sexual misconduct claims from former brothel workers.

Laxalt did not take the bait.

“I don’t plan on campaigning with (Hof) or endorsing him and that’s it,” he said after a meet-and-greet with military veterans in Reno. “I’m not going to engage in anything in between.

“We’re not concerned about it. It’s not something we’re paying attention to.”

Laxalt, who declined to endorse either Republican during the primary, was far from the only GOP politician to pull away from Hof.

Assemblyman Jim Wheeler, R-Minden, who was on hand for Laxalt’s campaign event on Monday, predicted the Assembly would take the extraordinary step of declining to seat Hof during the upcoming legislative session.

Democrat Jason Frierson, who’s expected to be the next Assembly speaker, in June told the Nevada Independent he doesn’t plan to take that step “unless misconduct occurred after Hof was elected or something criminal arose.”