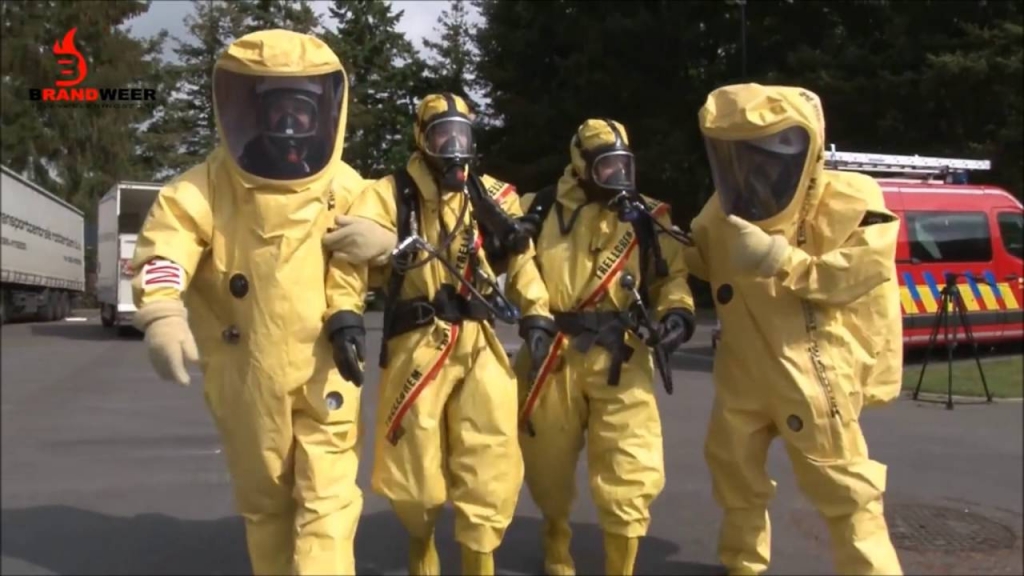 (Hofington Post) – If Congress is a swamp, the Nye County Commission is a sewer.

Draining it won’t be enough.  We’re gonna have to don biohazard suits, pump it out, scrape the mold, fumigate it, and disinfect the entire operation from top to bottom.

If only this was an exaggeration!  Grab a cup of coffee and read the latest outrage…

Naturally, it made local, state, national and international news.

In response, Hof immediately filed a lawsuit accusing the Three Commissars of violating his constitutional rights and asking a judge to issue a temporary restraining order (TRO) blocking the revocation until the matter can be settled in a court of law.

A preliminary hearing was originally scheduled for this Friday, but has been expedited to tomorrow.

The media reports didn’t have at the time – and, thus, didn’t report – all the facts surrounding this latest retaliatory action by the Three Commissars.  They have, however, been outlined in the 99-page TRO request.  Here’s a brief summary in Joe Lunchbox language…

In the TRO request, Hof’s attorney – Mark Randazza, as sharp a constitutional law mind as you’ll find on either side of the Mississippi – lays out the case that the revocation was issued as part of a long-standing vendetta for both political and personal reasons…

“Mr. Hof has operated multiple brothels since 1992 and had no significant issues with Nye County regarding license renewals or code enforcement until he entered the world of politics.”

1.)  According to the Nye County ordinance, brothel owners must apply for a renewal of their license every quarter “on the form provided for renewal” by the Nye County sheriff.

2.)  To the best of anyone’s knowledge, the “form” consists of what is essentially an invoice telling the business how much it owes.  Since the amount due changes from time to time, the business can’t pay until it receives the invoice.

3.)  At the bottom of the invoice is a check-off box reading “I am no longer conducting business in the city as of (insert date).  I certify the above information is correct:” – with a signature line below it.

4.)  To the best of anyone’s knowledge, no one has ever signed the form and submitted it with payment unless, in fact, the business had gone out of business.  They simply mail in their renewal fee listed on the invoice.

5.)  Traditionally, the invoices have been mailed out by the sheriff’s office 30 days before the start of the next quarter and the business then mails in the due amount.  And according to the TRO, “For the past eight years the Love Ranch South has paid the fees that the sheriff’s office bills every quarter.”

6.)  In this most recent case, the third quarter began on July 1st, but the invoices weren’t mailed out until June 14th.  Nevertheless, Hof paid the invoice in full on or around the due date – July 1st.

7.)  “On August 8, 2018 the Sheriff’s office submitted a recommendation to the Nye County Commission that the Love Ranch South’s license be renewed.”

8.)  Knowing the sheriff had already determined the Love Ranch was in compliance and was going to routinely – as it’s done for the past eight years – recommend renewal of the license, no one from the Love Ranch attended the meeting.

9.)  At the meeting, commissioners discussed the fact that Sheri’s Ranch brothel – one of Hof’s competitors – “had not turned in certain required information required for its business license renewal.”  The commission then voted to give Sheri’s an additional 30 days to submit it.

10.)  Next, the Love Ranch came up for discussion.  Madame Wichman then surprisingly “asked the Commission to propose a motion to revoke the (Love Ranch) license immediately without a hearing” – unlike what they’d just done for Sheri’s Ranch.

11.)  Why?  Because, Madame Wichman explained, the renewal form and payment for the third quarter didn’t arrive 30 days BEFORE the due date as technically required by the Nye County ordinance – even though the form wasn’t mailed out until two weeks AFTER the technical due date.

12.)  Blind-sided by the proposal to yank the Love Ranch business license, Commissioner Donna Cox suggested holding off until the next commission meeting so that Hof and his attorney could be present to speak to the issue.  But Madame Wichman was having none of it.

13.)  Now here’s where the real monkey business started to take place.  Because Madame Wichman is the commission chair, by rule she wasn’t allowed to make the motion to revoke Hof’s license.  But none of the other commissioners would do it.  So she “turned the gavel over to the Vice-Chair” and “then moved not to renew the license.”

14.)  The Three Commissars supported immediate revocation.  Commissioner Cox and Commissioner John Koenig were against.  And Sheriff Sharon Wehrly – also a voting member on licensing matters such as this and who had already recommended renewal – would have also been a “no” vote.  That would have resulted in a 3-3 tie and the motion would have failed.  However…

15.)  Madame Wichman grilled Wehrly about her vote before taking the tally.  Wehrly then “asked for a break so that she could speak to her attorney, but Wichman refused.”

16.)  “The Sheriff then abstained from voting, citing a conflict of interest due to” a pending previous lawsuit filed by Hof against the county in which she had been named and Wichman’s refusal to allow her to consult with her attorney.

17.)  Despite also being involved in pending lawsuits – and despite the fact that Borasky and Schinhofen had recused themselves from matters involving Hof previously, also citing a conflict of interest – they decided to vote on this one.  As such, the revocation measure passed on a 3-2 vote.

The whole thing stinks like a bucket of rotted fish.

The supposedly required “form” was mailed out late.  Nevertheless, Hof paid the renewal fee promptly.  And the Sheriff recommended renewal.

The commission voted to revoke the license anyway on a first-ever technical reading of the ordinance – despite having just granted a 30-day extension to one of Hof’s competitors under similar circumstances.

No notice was given that the routine renewal that the Sheriff recommended would be ignored.  As such, neither Hof, nor his attorney, nor any of the workers who are now out of work were present to argue in favor of saving their jobs.

As Mr. Randazza notes in his filing, “Schinhofen is so obsessed with Hof that he wrote a song about him” that he played and sang in a radio interview shortly after losing his re-election bid in June.  And get this…

At the end of the meeting, “Comments made between Commissioners Schinhofen and Borasky that were recorded on a ‘hot mic’ indicated that they both have a vendetta against him.”  And when Madame Wichman realized the mic was on and recording what they were saying, she quickly advised them to turn the mic off.

“It is clear that Schinhofen and Borasky’s votes to revoke the Love Ranch brothel license was not for failing to follow renewal procedures,” Mr. Randazza wrote, “but to retaliate against Hof for his public criticism about them and for his petitioning of the government for redress in which he named them personally.”

“Closing a legal brothel,” Mr. Randazza concluded, “for returning a form a few days late, when that form was not provided prior to the deadline for return, serves no public interest.”

If there’s justice in Nevada this outrageous revocation for petty political reasons by the Three Commissars with a grudge and deep personal animosity will be overturned by the court.  We’ll know soon enough.