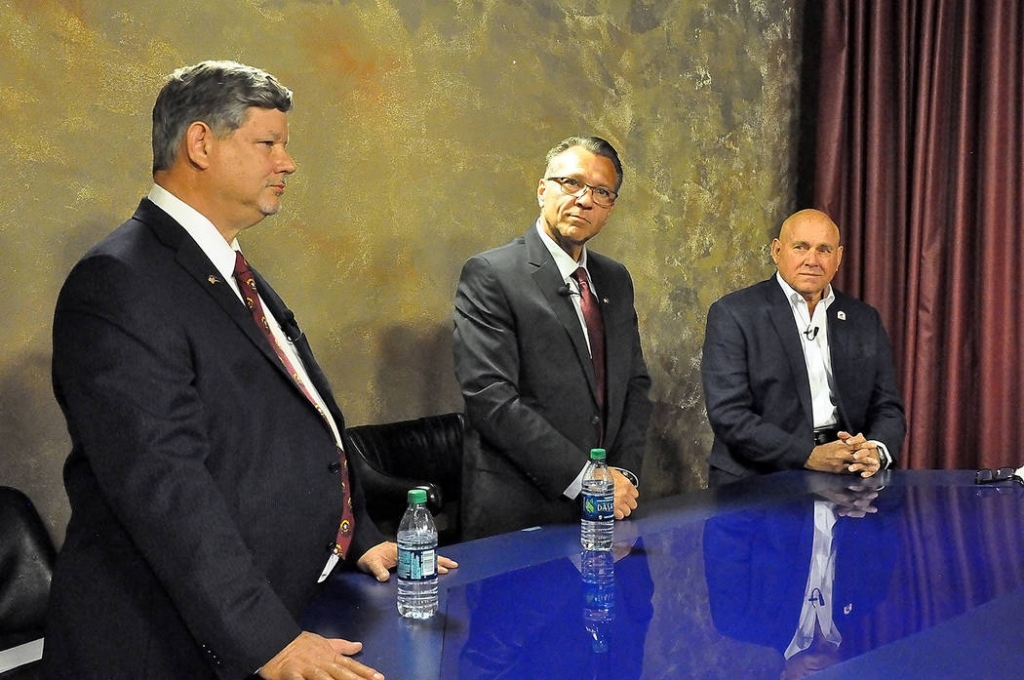 It was a somewhat unique event, taking place April 11 during a live television broadcast on KPVM-TV. This allowed residents to tune in and learn all about the contenders hoping to represent them at the legislative level.

With all three seated at the table, the issues were thrown into the spotlight and the differences between the candidates were readily perceptible.

Oscarson has sat on the state Legislature since 2013 and currently works as the community relations director for Desert View Hospital. As the incumbent, Oscarson underscored his accomplishments over the past five years, stating, “I am very proud of the reputation that we have, the things that we have accomplished, historic accomplishments in the Assembly during the last six years that I have been in term and have seen Nye County move forward… We have seen tremendous change and tremendous growth…”

Hof cited several statistics included in a USA Today report, noting the county’s declining population as well as its poverty and unemployment rates. “I think I can do better,” Hof said. “James has had his opportunity and it’s my turn now.”

Bradley endeavored to stay on the outskirts of the fray between Oscarson and Hof, concentrating instead on his background in health care, specifically mental health.

Bradley is a former law enforcement officer, board certified addictionologist, licensed chiropractic physician and current candidate for a doctorate in clinical psychology, as well as operating a private practice, teaching and directing the chronic pain program at Solutions Recovery in Las Vegas.

His family is also deeply involved in drug and alcohol counseling, with Bradley noting, “My entire family spends our time, every day, serving our community.” He stated that he would welcome the opportunity to bring his experience to bear at the legislative level, remarking that he thought he could provide a “fresh pair of eyes” to view the situations affecting Nevadans.

As for the reasons that prompted Hof to seek the Assembly District 36 seat, he explained that he originally started on his journey into the political realm in 2016, when he decided to run against Oscarson following Oscarson’s vote in favor of passing the Commerce Tax. “I am tired of having my taxes raised,” Hof declared. “The Commerce Tax is the worst tax that ever happened.”

Hof also dubbed the measure the “Oscarson Commerce Tax”, to which Oscarson chuckled and replied, “Boy, I wish I knew I was powerful enough to have a bill named after me, that’s pretty impressive.”

Bradley, though not zeroing in on Oscarson specifically, also expressed his dissatisfaction over the Commerce Tax. “I think raising taxes should be the last go-to and not in the interest of expedience, something that we jump to, to correct things by throwing more money at it,” Bradley said.

Oscarson defended the legislation, declaring that unlike Hof kept repeating, the Commerce Tax was not like the Margins Tax that was voted down by the citizens.

“We ran the Commerce Tax specifically for the children to be able to have better education in the state,” Oscarson said, detailing Nevada has moved to number one in the nation for job growth and is the fifth best state in the nation in which to do business.

“It doesn’t sound like the sky is falling, it doesn’t sound like doom and gloom,” Oscarson said forcefully. “It sounds to me like businesses and people have decided to move here, to get the better-paying jobs, to do the things that we are able to do for our state.”

Hof rebutted that yes, the economy was on the upswing but he believed that was simply because of President Donald Trump. “The Commerce Tax had nothing to do with it,” Hof asserted.

Hof and Oscarson also quarreled over each other’s stance as a Republican, with Oscarson remarking that he himself has been a Republican for many years while Hof only switched political parties last year. “I don’t believe he has even been able to vote as a Republican, he hasn’t been one that long,” Oscarson said.

On education, all three agreed that this was one of the most pressing issues in the Silver State today and improvements need to be made to bring Nevada’s education system to a higher and more effective level.

“I would bring a team of professionals and get out and talk to the different school districts to find out why we have the low performance,” Hof said. “We aren’t getting the bang for the buck… We need to get in the Legislature and do something about it… There is a roadblock someplace that is giving us these low rankings and we have got to change it.”

Oscarson agreed that accountability is key. “Quite honestly, I think we have given enough money to the school districts right now, it is their job to manage it and make sure it is spent properly… Since I have been elected I have had a good relationship with the superintendents that I represent and we continue to have dialogue about what we can do and how we can do it.”

Bradley came prepared with details on his plans specific to education, which incorporates his background in the health care field.

“The first bill I would propose is to make every school a therapist practicum site. Now, with that, we have a licensed therapist on site, one, and as the on-site supervisor they could have up to 20 master’s level interim therapists each offering 25 direct student contact hours, that’s 500 hours, every week for free.”

Bradley explained that this would be a good situation not only for the schools and students but also for those seeking the degrees in therapy, which requires hands-on time at certified practicum sites.