Assemblyman James Oscarson was first elected in 2012 for the Assembly District 36 (Nye/Lincoln/Clark counties) seat.  During the campaign, he clearly stated: “Nevada families cannot afford to have their taxes and fees raised during this time.”

Oscarson was elected on that campaign promise – but broke it just three months later when he voted for SB475, a $600 million tax hike!

Oscarson then ran for re-election in 2014…and again promised he wouldn’t raise taxes.  Then broke his word AGAIN in the 2015 session by voting for the largest tax hike in Nevada history!

In fact, according to Assemblyman Ira Hansen, Oscarson was the DECIDING VOTE that enabled that $1.2 billion tax hike – an accusation confirmed by the conservative Nevada Policy Research Institute.As if that wasn’t bad enough, Oscarson also voted for a total of 29 out of 32 proposed tax/fee hikes during the same session!

Which brings to mind what Grover Norquist, president of Americans for Tax Reform, says about “rathead” Republicans who vote for tax hikes…

“Raising taxes is a sign of incompetence in a politician. He/she cannot manage. A willingness to raise taxes is telegraphing such failure.”

I won’t.  And you have my pledge IN WRITING. 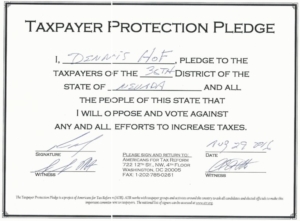