Your Tax Dollars at Work: Feeding Piggies at the Trough 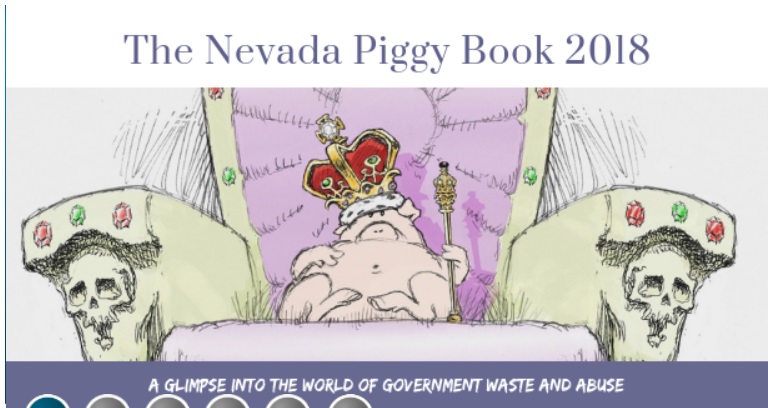 (Dennis Hof) – When lobbyists and big-government liberals learn that I’ve signed the Taxpayer Protection Pledge promising you that I’ll “oppose and vote against any and all efforts to increase taxes,” I inevitably hear, “But, Dennis, there’s nothing to cut in the budget.”

And at their recent annual dinner, Nevada Policy Research Institute (NPRI) had a copy of their latest edition of their “Piggy Book: A Glimpse into the World of Government Waste in Nevada” on our tables.

In it are examples of how “government failures are actually used as an excuse to increase government spending even more.”  Here are three – and you might want to sit down for this…

Back in 2015, the Nevada Legislature approved a $75 million contract – paid for with a hike in your DMV fees – to upgrade the Department of Motor Vehicle’s computer system.   And for some reason, the contract was awarded to a company based in…Mumbai, India.

Two years later an audit “revealed that the program was months behind schedule” – in part because the company “had only delivered 6 employees to begin work despite originally promising that 25 members of its so-called ‘A-Team’ would be deployed on the project.”

But that was only the start of the nightmare.  The audit also found that “not all of the employees could speak English.”  As a result, the DMV “had to edit project documentation and meeting minutes provided by the contractor for grammar and spelling because they were not written in a clear manner and were not usable.”

The company was eventually fired – but only after “roughly $17 million had already been spent with the firm.”  So the DMV is still operating with the old system while you and I continue to pay the higher fees for the new, unusable system anyway.

The Clark County School District – which has employed my opponent for the last 19 years – is, as Al Gore would put it, “a miserable failure.”  Nevada continues to be ranked dead last in education.

And because of that, NPRI reports in the Piggy Book, “the number of students transferring to charter schools has soared in recent years.”  Charter schools are public schools that are given a lot more freedom in how they educate their students and without being saddled with the albatross of the teachers union around their necks.

So what did CCSD do?  Did they take steps to make their failing schools better?  No.

Instead, CCSD approved the creation of “a $117,000 marketing and PR job aimed at DISCOURAGING kids from seeking out alternative educational opportunities.”  A Minister of Propaganda focused on “trying to keep children trapped in a failing system.”

OK, one more, but you might want to grab your blood-pressure medicine…

The Mohave Desert Tortoise is on the endangered species list.  As such, when a contract was awarded to repave a 37-mile stretch of highway just north of Las Vegas, federal funds were obtained “to prevent the fragile tortoise population from wandering across the busy roadway.”

The government solution: $529,000 for the “construction and installation of federally-approved fencing adjacent to U.S. 95.”

Alas, after the project was completed the U.S. Fish and Wildlife folks determined that “the newly-installed fencing did not meet federal requirements” because certain sections of the fence were only 8 inches off the ground instead of 24 inches.

So “Nevada taxpayers alone were forced to cover the $736,000 required to remove the existing, inadequate fencing and replace it with new fencing in line with federal regulations.”

Wait, it gets worse…

“Because officials wanted to allow tortoises the flexibility of traveling under the highway at certain access points, a series of culverts were dug at an additional cost of $320,000.  Unfortunately, due to faulty drainage systems, tortoises were often found to have died in these well-intended ‘tortoise passageways.’”

As these examples demonstrate and NPRI concludes, “Nevada lawmakers are all too willing to raise taxes rather than hold agencies accountable to the very people who fund them.”

Exactly.  And rest assured, while serving you in the Nevada Legislature I’ll be working closely with NPRI and other fiscally conservative organizations and individuals to fight wasteful spending rather than raise taxes.

As Ronald Reagan so famously put it: “The problem is not that people are taxed too little; the problem is that government spends too much.”

By the way, you can get more information on the absolutely great work NPRI does by visiting www.NPRI.org.

(Mr. Hof is a successful Nevada businessman, author, philanthropist, star of an award-winning reality TV series on HBO and president of the Home of Freedom PAC.  He’s running for Nevada’s Assembly District 36 seat.  He can be reached at DennisHof.com)